1. Your current work, In Seven Days…, is considered a narrative of Barack Obama’s Presidential campaign. That appears quite removed from your previous work as a portrait artist. Is that the case?

Not as far as I’m concerned. I think it’s fair to say it’s the biggest project I’ve done so far, in the sense that I’ve brought every aspect of my practice into this one project. For that reason it’s the most thorough project I’ve made. It is connected to my work House Slave_Field Slave on permanent display at the International Slavery Museum – there are parallels conceptually, technically and creatively between the two works. House Slave_Field Slave is a work examining the story of contemporary slavery and I worked with Anti-Slavery International, going through their entire archive, as I produced a distillation of that global story. The outcome of that distilling process was three massive paintings made as a tryptich.  I used gold leaf as I was thinking about ‘value’ and how and why we value certain people differently. From that there is a direct relationship to Day Two: Struggle where I used gold on Obama’s fist; in that piece I was thinking about identity and how each of us has to come to terms with our own identity in order to find our power. That piece is about our struggle to find that power and the fist represents that power. In Dreams from my Father, Obama describes how he went on this huge journey to really come to terms with, explore and understand his black and his white heritage.

2. The work itself is highlighted by the seven images as condensed viewpoints of your experience during those visits. However, the process behind each image is just as much a part of the art work. What makes that ‘distilling’ so significant?

The distilling is the most important aspect of my work as it’s the process which underpins everything I do, even if the end result does not obviously show that process. In all my work, I first consider the subject, the story I’m trying to tell, then I collect as much information as I possible can to understand for myself all aspects of that story. Both my direct experiences, photographs I take myself and my research become a part of the work.  There was so much written, recorded and said all over the world about Obama’s 2008 election that I had a vast amount of information and opinion to work through. I was aware that I had a unique opportunity with the particular access that I had but, at that same time, being an artist in that context and not a journalist I wasn’t constrained with the objective of making an image for that week’s media cycle. I was able to distil all these experiences and materials and think about what these themes would mean to future generations.  I really had to avoid being caught up in the moment and the news cycle that was dominating the “there and then” so that distillation process took a lot of discipline. I wanted to recreate the greater picture; what can we learn from this? What will this mean for my boys? Identity? What does it really take to achieve something impossible? What is democracy and collective action? What is the relationship between a leader and the responsibility of all of us in that process? What is hope? What is change? What is race? For that reason, I kept information about my work on this project virtually to myself and that distillation process was crucial in the development of those seven images. 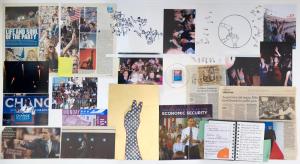 3. Were you initially looking for a subject to apply this concept to or was it the subject that gave rise to the concept?

On this occasion it was definitely the subject matter that inspired me in the first place. When I was pregnant with our first son, my husband came back from a trip to America in 2004, where he’d spent some time with Obama, and he said this guy’s seriously thinking about running for President. As a white mother about to have a mixed race child, I started thinking about HOW my child would experience the world differently to me and how I’d not greatly considered that before. I wanted to go on a journey of exploring this as much as I possibly could and recognised the incredible path Obama was about to take just running for President. As an artist who is interested in human stories, it gripped me professionally. I began thinking I would do a portrait of Obama but it turned into a portrait about a moment in time and how each of us played our part.

4. When you speak about In Seven Days… you often use the word ‘change’. What, or who, was it that altered?

Obama becoming President was more than just a journey for that individual. It involved all of us. It wouldn’t have happened if that wasn’t the case and, in fact, he himself kept saying that. At rallies, he would regularly say: ‘This isn’t about me. It’s about all of you’. I then realised that I didn’t just want to make a portrait of him but that I wanted to make something that reflected all of us. I didn’t know at that time that I would end up producing seven images but I knew it was going to involve more than just one to visit him. It turned into six trips; I went to rallies in New Hampshire and Philadelphia, I went to election night in Chicago, I went to his first press conferences as President Elect and then I went to the inauguration in Washington. It turned into a huge journey, one which if I’d been presented with at the start I probably would have been far too daunted to consider!
Now that I’ve made the work, I can reflect on it all and I do see that the story I’ve told is partly my story too. The struggle, the hope, the change is something I relate to. The project is not about me at all but there are aspects or themes within it that I absolutely identify with. In addition to that I can clearly see that this journey, experience and project have moved my work on.

5. You have also commented on the fact that this Presidential campaign had significance for your own family. Would you be willing to expand on that?

That’s really hard to answer. I don’t know what I’d have been like as a mother had I not gone on that journey but I do know that for both of my children the first name they knew outside of our immediate family was Obama’s. That’s not just because my husband and I were talking about him all the time but because of the media attention it was getting at that time. For example, every single newspaper or magazine that would come in the house had him on the front cover. But really that’s what my work’s about; I don’t know what impact this will have had on their lives but in twenty years time they can look at my work and think back to that time and then make a judgement. How can you really value the effect of something as it is in the immediate process of change? Aren’t profound hope and profound change a more long term set of values? Obama’s speech in Denver was forty-five years to the very day after Martin Luther King’s speech and that time span allows us to be more accurate in our measurement of those values so maybe in another forty-five years we can apply that again.
I’ve noticed some additional, subtle changes that add up to something quite significant; the first ever Disney movie with a black heroine came out a year later. Is everything solved? No, but there are certain things which are now a given; the most powerful role in the world has been taken by an African-American man.

6. In that context, is In Seven Days…, at any point, an unbiased reflection of historical events or at all times a deeply personal perspective?

I did an event at the John Sloane Museum recently where I worked with other artists and we discussed the role of artist as historian. I wouldn’t say I was a historian as I wasn’t doing the academic research that a historian would do, but then I was more a historian than say a media journalist. I was not trying to write an academic thesis but I was trying to produce a visual thesis. The visual understanding of this was the primary focus for my work. It’s a really interesting question. The artist’s contribution to history in that sense is considerable. Many artists have engaged in significant events of their time and years later we understand history partly from the art of that time.

7. Your more public work often has a political element; from working with local councils, reflecting on communities or the concept of modern slavery. Is that one of the main drivers for your work?

Politics with a capital ‘p’ is not the driving force, no. The politics of human beings and their stories however is central to my work. In In Seven Days… I actively tried to distance myself from ‘party politics’ as much as I possibly could, because I’m not American and not interested in the American political system; I wasn’t telling a story of Left versus Right and I didn’t want to find myself absorbed in that story. However, a politician struggling to create change in people’s lives is something that I am greatly interested in.

8. Of all the art works you’ve produced, which has been your most challenging?

In Seven Days… was the most challenging in terms of the distilling process as I had over three thousands photographs, hundreds of drawings and piles of research, and also more themes and experiences than any other project I’ve done so far. But the work I’m doing at the moment on religious leaders is even bigger than that!

9. What ideas do you have for future works?

Hopefully this time next year I’ll be having a show of my current project. I’ve spent the last six years sitting in on the private and public meetings of religious leaders around the world; the Grand Mufti in Cairo, the Pope, the Archbishop of Canterbury, the Chief Rabbi, the Hindu Swarmi in India and the Dalai Lama. I’m now working on telling that story. 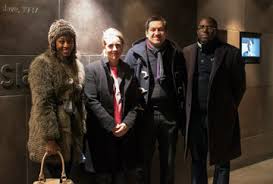 10. Would you be happy to give a brief outline of your life story?

I studied at Edinburgh College of Art after I left school and completed the Fine Art course there. I then read History of Art at EdinburghUniversity and did a two-year Masters Degree there. I got the chance to study art in relation to global history and religions rather than just from a European art perspective, which was really defining for me and my work. I married David and had my boys in 2006 and 2008.